The world’s best action sports athletes are ascending on Aspen again January 2016! Celebrating its 15th year in Aspen Snowmass, over 200 world-class action sports athletes from 20 different countries are competing. The world’s best skiers, snowboarders, and snowmobilers have trained all year for this event.  X Games Aspen isn’t just about extreme sports- there will be a large festival village with interactive experiences for fans plus a huge music festival at Buttermilk Mountain.

The music festival showcases incredibly popular musicians (Deadmaus, Twenty One Pilots, Run The Jewels, Kygo, Nas & more) creating a beautiful soundtrack for the Games. ESPN even created a playlist as a sneak peak to the music fest. Check it out here: X Games . 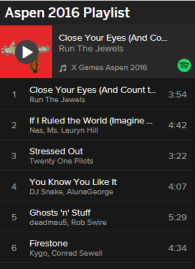 There’s something for everyone in Aspen-even gamers. The XBOX 2016 Halo Championships will be at X Games where you can watch the world’s best gamers! Read more here Halo World Championships .

If you’re interested in the science behind these incredibly dangerous, fearless and athletic performances check this out: Skier X Video  .

All competitions are free and open to the public. Yes, you read that right! Also, ESPN and ABC will televise a combined 16 hours of live HD X Games Aspen competitions. Hopefully you weren’t planning to bring your drone to the games as it was recently decided they won’t be allowed. The safety of athletes and fans is a top priority. Be safe. have fun.