David Byrne came to Austin for this year’s SXSW 2019 Film Festival (although he is an obvious music-film crossover) and we were fortunate to hear him speak before and after the screening of his epic film “True Stories” originally released in 1986. The movie has been remastered and is being released in new 4K version-even better than the original. The iconic venue Paramount Theater on Congress ave was the setting and it was perfect. More event details at SXSW Screening.

David Byrne is a Scottish-American singer, songwriter, musician, record producer, artist, actor, writer, and filmmaker who was a founding member, principal songwriter, and lead singer and guitarist of the American new wave band Talking Heads (1975–1991).  Best known for hit songs ‘Once in a Lifetime’, ‘Wild Wild Life’, ‘This Must Be the Place’, and more.

You don’t have to be a huge Heads fan (but we are) to enjoy Byrne and his infamous creativity in music and film. We got to cover his tour last year where he wore a silk suit and was barefoot as he held up a large brain as he sang.  See our concert photos. All it takes is a google search for music videos in the ’80s to see his amazing creativity and bizarreness at a time when MTV was just launching. The film soundtrack is of course, mostly Talking Heads songs and the band has cameos in the film and people were noticeably dancing and singing along in their seats throughout the screening. The songs are fun, goofy, whimsical, and parodic. Byrne is a true artist in every sense of the word- using both his intellect, visuals/imagery, and lyrics to tap into emotions and provoke audiences to think or act differently.

Although the film wasn’t highly reviewed at the time (although well received in Europe), it has become quite the cult classic and is super entertaining. The film was so wild for its time and now watching it again today, it’s a hilarious throwback and fun to watch both Byrne and John Goodman in their youth. The setting is a fictional American small town Virgil, Texas. Byrne narrates, directs, and stars in it and takes us for a ride in a classic car dressed as a slightly nerdy cowboy while Goodman searches for a wife. Most of the film was shot around Dallas.

Making fun of corporate life and suburban America, Byrne often interjects his anti-corporate messages and political issues-part of what makes his music so meaningful. The script was basically created from his weekly news clippings. We love that Stephen Tobolowsky had an influence on the script working with Byrne-his quirkiness fits right in. We are amazed at how much of the topics in the film are still relevant today-and even Byrne has talked about how the boom of computers and tech (and in Texas) has dominated so much of the economy today (although most of the tech industry takes place in big cities and not small towns, the movie really holds a lot of truths). Sadly, malls have become like dinosaurs and they have all but closed down since the boom of online shopping. It’s fun to remember those times when going with your friends to the mall was a HUGE deal and the start of one’s independence in youth. Byrne is a true genius. We’d love to have even just a few minutes inside his brain. 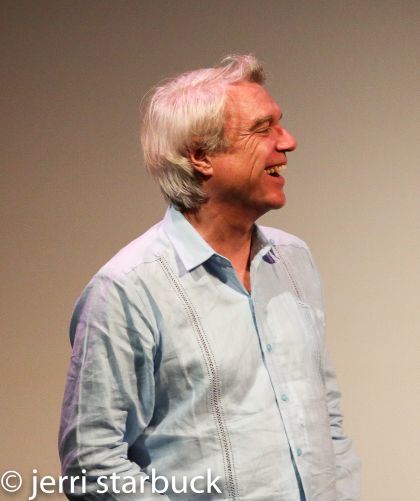 The film is presented as a series of vignettes centered around Byrnes character where he observes the citizens as they prepare for the “Celebration of Specialness” to mark the 150th anniversary of Texas’ independence. The event is being sponsored by the Varicorp Corporation, a local computer manufacturing plant. The lip sync contest for Wild Wild Life was hysterical and even better watching this time around.

-Louis Fyne, (John Goodman), a country-western-singing clean room technician at Varicorp who is unlucky in love,
-Civic leader Earl Culver (Spalding Gray), who never speaks directly to his wife, Kay (Annie McEnroe),
-Miss Rollings (Swoosie Kurtz), who never leaves her bed,
-Mr. Tucker (Pops Staples), Miss Rollings’ personal assistant, a kindly voodoo practitioner whom Louis hires to help him find love,
-A conspiracy theorist preacher (John Ingle) whose shtick owes a great deal to the Church of the SubGenius,
-Ramon (Tito Larriva), a Tejano singer who claims to hear tones from people,
-“The Lying Woman” (Jo Harvey Allen), who recounts fantastic episodes from her life to anyone who will listen.

Only in a film screening setting do you get to see an iconic film/music performer and hear stories about the making of the film, how it was cast, how the sets were built (sometimes with big Texas storms wiping them out), and all the fun they had making the film. It was one of the highlights of the entire festival for us. The only thing that could have possibly made this evening any better would have been an appearance by Mavis Staples who was in town at the same time for several SXSW showcases and Willie Nelson’s Luck Reunion.