From a beautiful drive in the rolling hills of the ‘hill country’ just west of Austin appears an amazing and special place called LUCK, Texas. It’s basically a sprawling ranch (complete with homes, recording studios, golf course, horses, and parties) just outside of Austin (famous lyrics) in Spicewood. This is Willie Nelson’s estate that uneducated passers-by on Bee Creek road, would have no idea about. Of course, when he bought it, there was no major highway or new neighbors. On this day, we got ‘lucky’ with the weather as it was clean and warm unlike previous days and weeks of gray and wet. 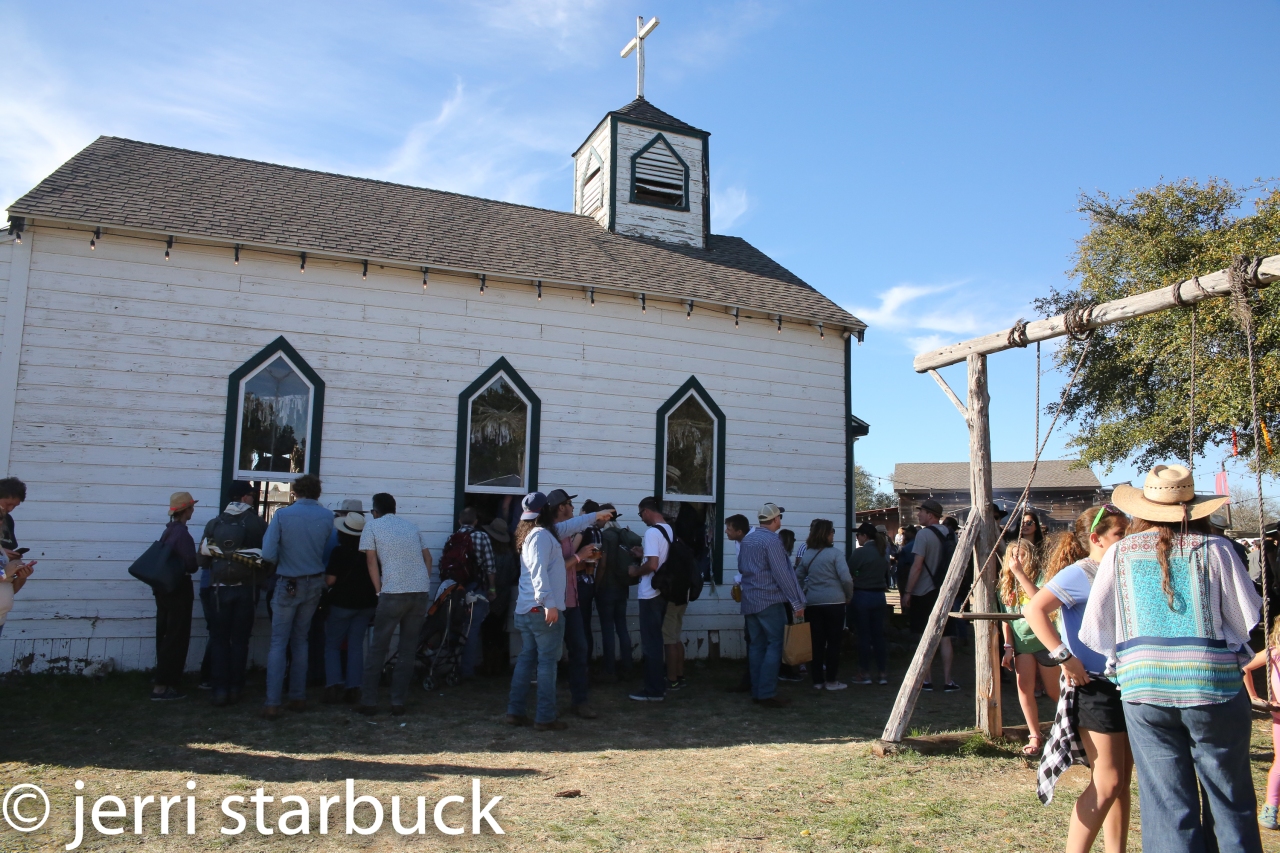 Luck Reunion is a one day music festival that isn’t just about country-far from it. It’s sort of SXSW or anti-SXSW- however you want to look at it. Far from the 300K people in downtown Austin during the 10 days of the annual SXSW festival, there were only 2,000 sold tickets to Luck this year which made it feel incredibly intimate and special. There were noticeably fewer people than last year, and it was enjoyable to move around the grounds freely from stage to stage.  The chapel is probably the most unique of the stages as it only seats about 20 people with only a bit of standing room beyond that. Most people try to get a glimpse through the many chapel windows.

The lineup was special this year with lot of amazing newcomers like standouts J.S. Ondara, Angie McMahon, Yola, Mountain Man, and Bonnie Bishop. Plus the super fun band Low Cut Connie played a wild set. There was plenty of star power too with Nathaniel Rateliff, Staples, Chris Shiflett (Foo Fighters), Lukas Nelson, Willie Nelson, Hayes Carll, and Steve Earle. Plus our locals Paul Cauthen and Shakey Graves are awesome. Of course we love them but we were blown away by the Marcus King Band, The Cactus Blossoms, Billy Strings, and J.S. Ondara (an angelic, sublime voice). See the full lineup full lineup 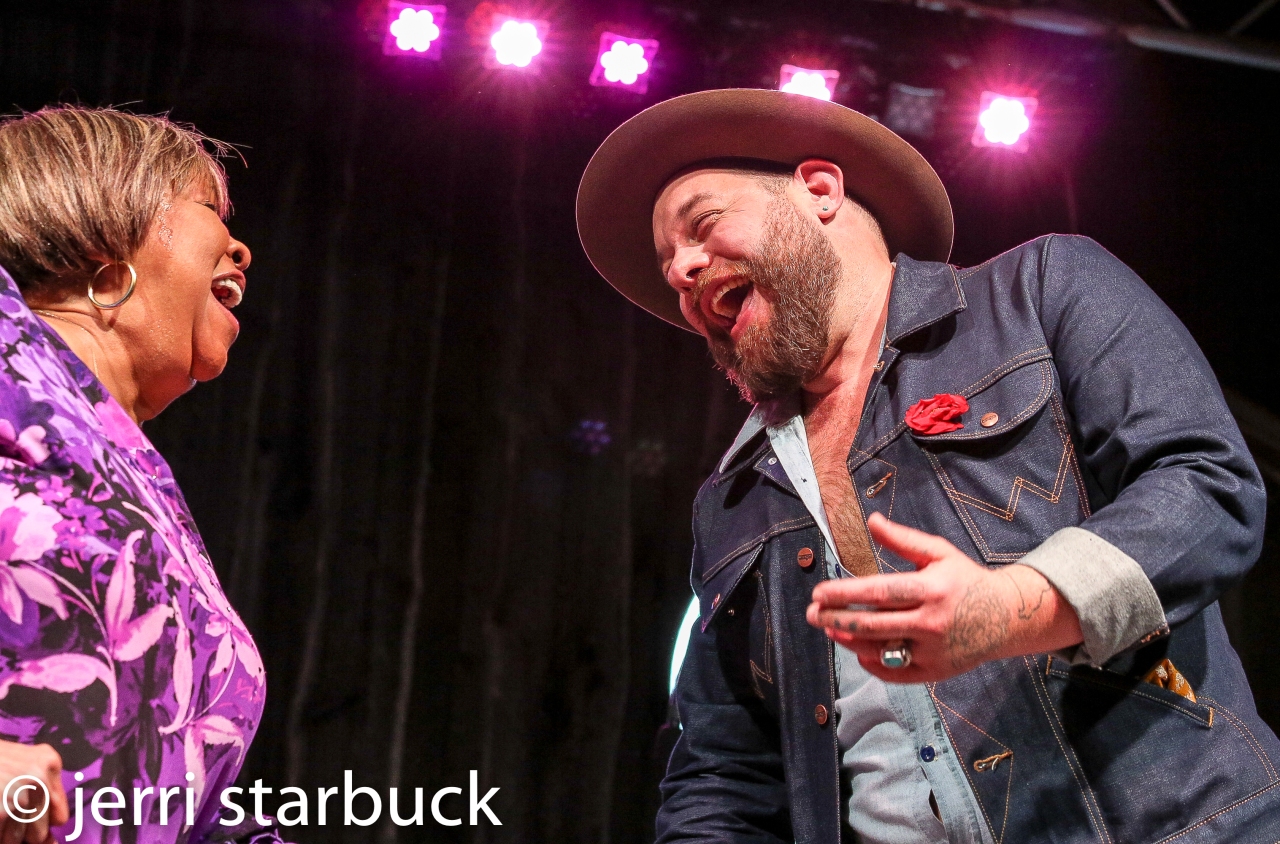 The stages ranged from a small outdoor stage in the beer garden to a tiny dark stage inside the saloon to the mega main stage with epic lights and sound and great production. We like the added ‘Stronger’ stage this year that was comprised only of female performers with headliner Mavis Staples-who pretty much stole the show and gave an especially soulful finale as she was joined by Nathaniel Rateliff and the other female performers (Yola, Angie McMahon, Mountain Man). 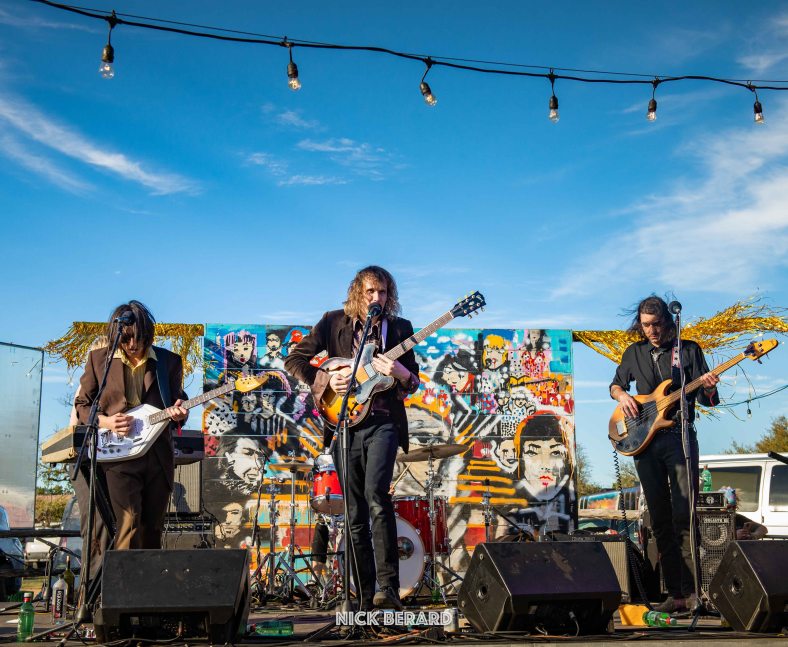 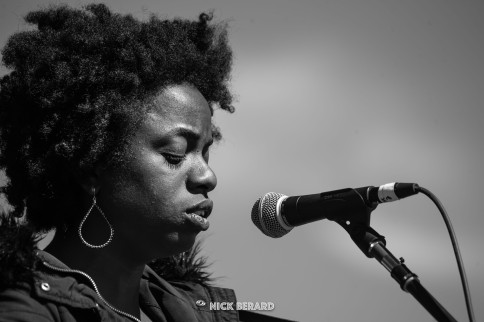 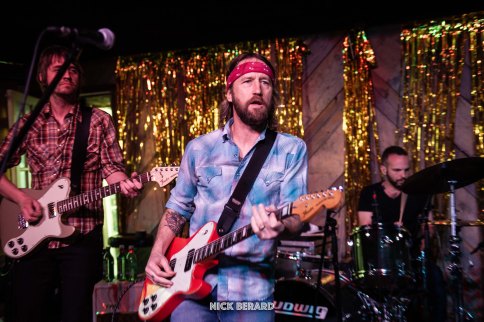 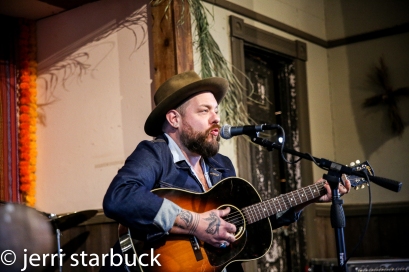 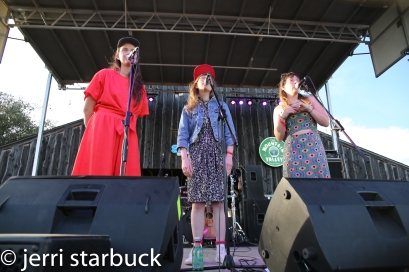 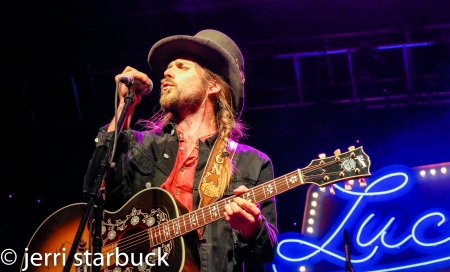 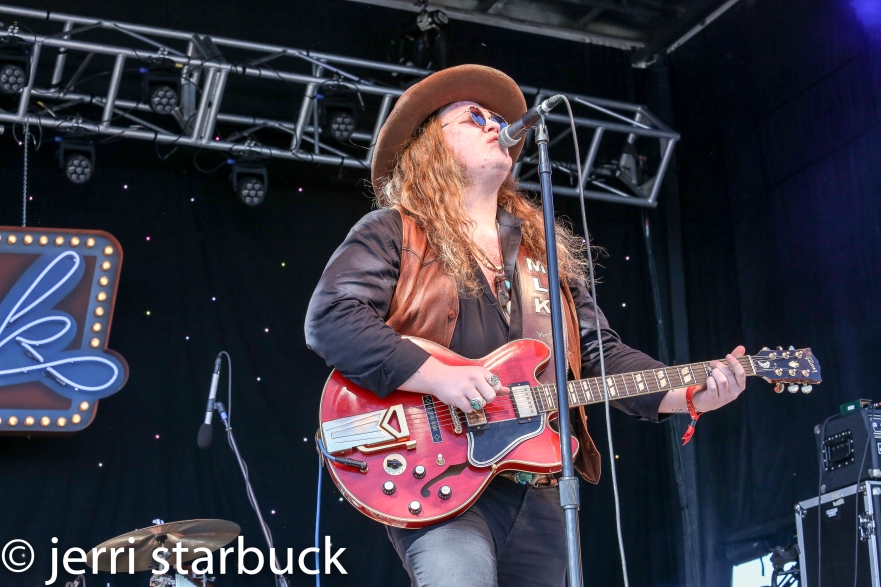 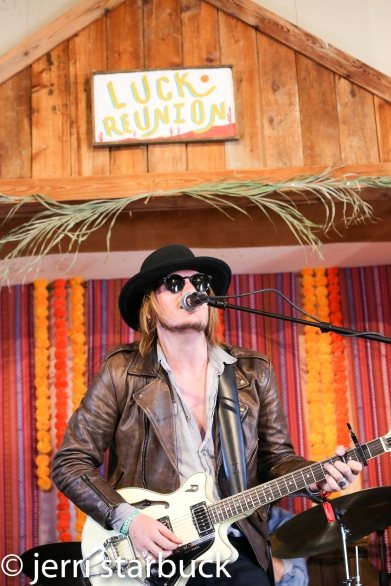 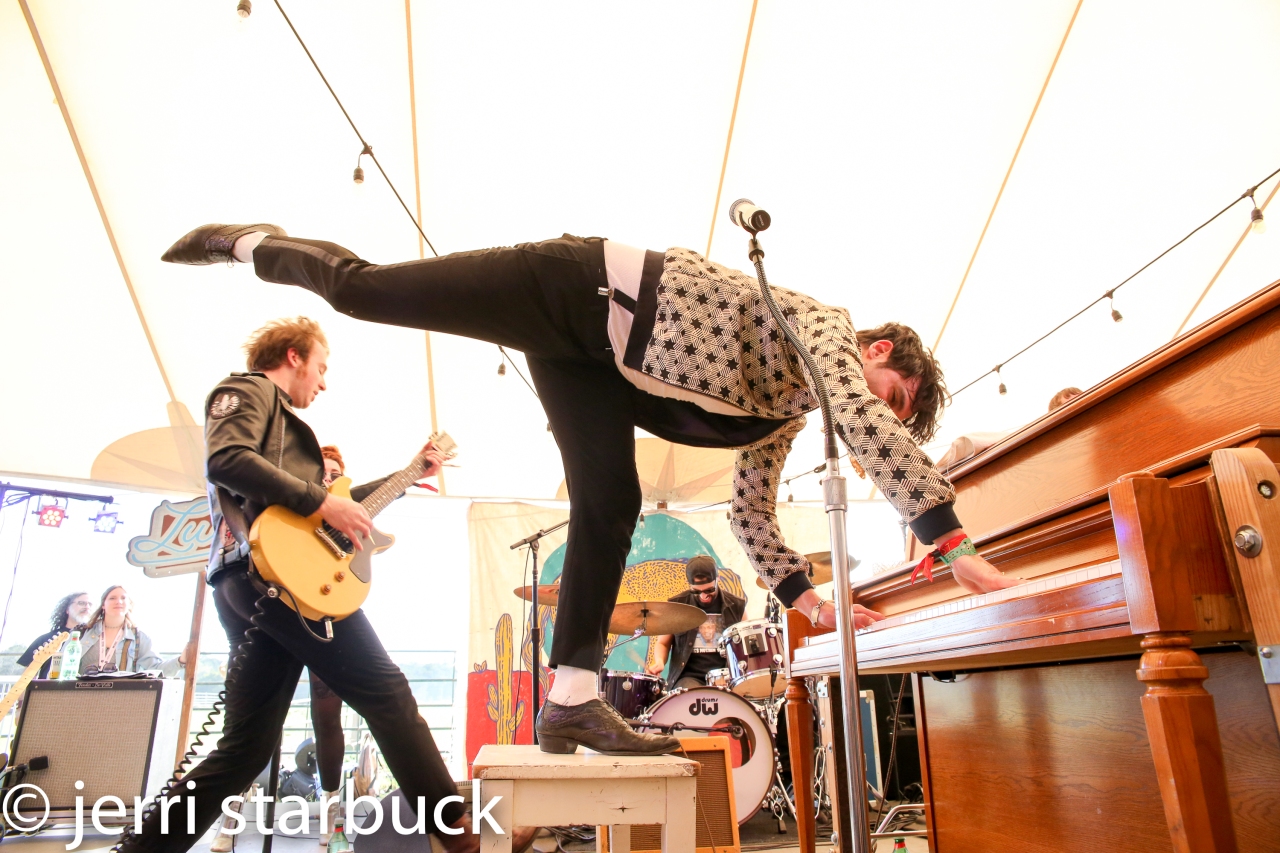 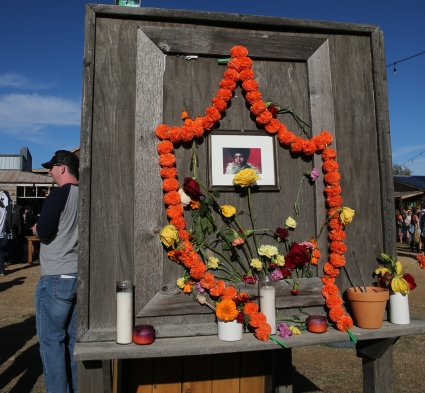 You see plenty of Willie around the grounds- from the Weed store to the new Willie’s Reserve CBD coffee. There are shrines with candles, flowers, and photos in tribute to passed-on musicians from Amy Winehouse to Tom Petty, Waylon Jennings, and legend Aretha Franklin. The buildings look like an old western movie set complete with working saloon, distillery, chapel, general store, and  homestead. The fake town was originally built for Nelson’s Red Headed Stranger film. Did we mention it’s free drinks all day thanks to sponsors like Titos Vodka and Jagermeister?

We got a special treat this year as we were invited to attend the listening party for Willie’s new album coming out this summer, “Ride Me Back Home” where his wife Annie and other friends were also gathered in the main building, the ‘World Headquarters’. You could also try Willie’s new hemp-infused coffee and jagermeister punch. 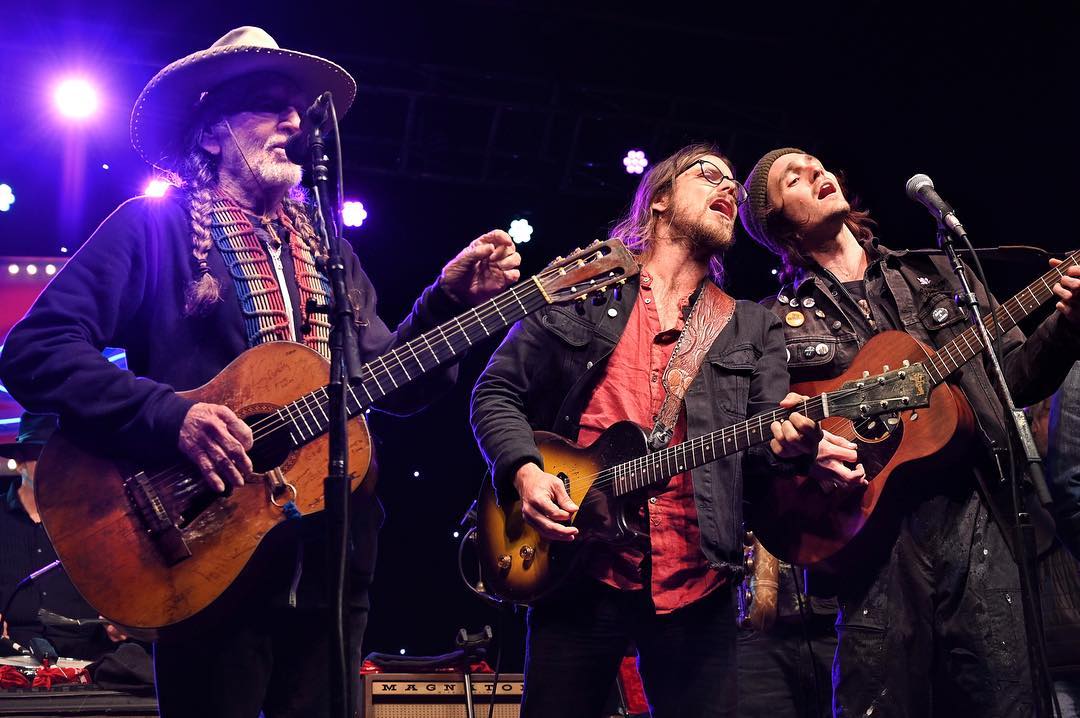 With a tradition of the Nelson family closing out the final sets of the night on the main World Headquarters stage- first Micah, Paula, then Lukas & his Promise of the Real, Willie is last and brings the crew on stage together for several iconic songs. Willie with his long time guitar, braids, hat, and jacket and iconic mannerisms- the finger in the air, the hand to his ear for a listen, and a peace sign or two- and he sounds good at 85, hopefully we have many good years ahead to see this legend.

We love that the website has to mention “absolutely no entry by ticket holders until 10am on 10/14”! They must have had experiences of people wanting to crash early or even overnight. Except for the obvious corporate involvement from big sponsors like Southwest Airlines and Titos Vodka, it’s really a commune-feel- almost like you’re back in the 60’s where people are free, fun, and buzzed. Everyone is chill and just wants to eat, drink, smoke, and listen. The merch is unique too and our favorite item is the “Don’t be an asshole” t-shirt.

Luck is about more than just the music, it’s also a fundraiser for Farm Aid (Potluck) and a way to help up-and-coming artists get some high-value visibility. Plus it’s the best people watching on the planet. The only downside we saw the entire day was the long wait to get out of the parking lot. Other than that, things just looked to be smooth sailing. Read more about Luck.

Luck is a tradition we’ve only been to the last couple years but plan to never miss in the future. There is truly nothing like it and you feel like one of the cool kids and ‘lucky’ ones just to be a part of it- part of the ‘Luck family’.