I had never been to the Historic Scoot Inn, and I was in for a treat. It is a quintessential old-school Austin venue. It sits in an area in east Austin where new real estate is popping up faster than one can blink an eye. Established in 1871, the Scoot Inn oozes character and history. Venues like these are what make Austin unique and sadly they are slowly disappearing. 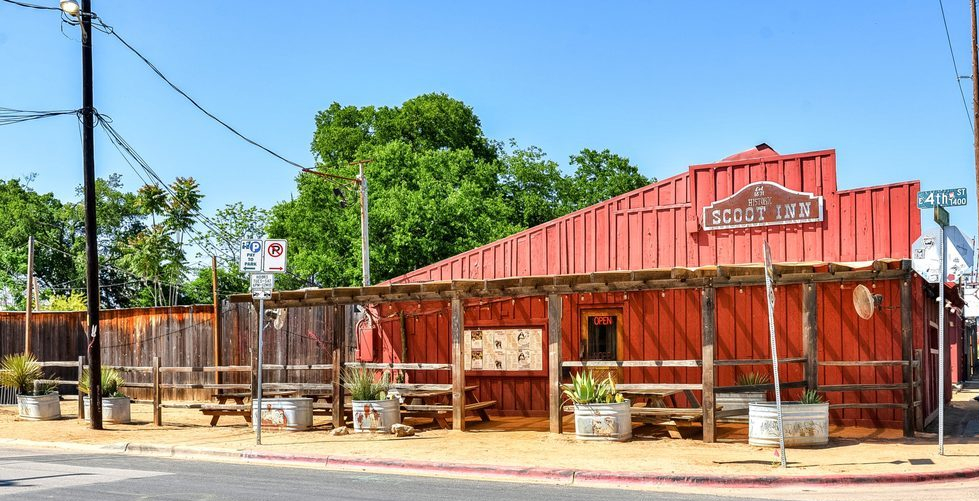 Upon walking in, the Scoot Inn felt a little like an upscale saloon. The stage is dark but is draped with cheerful lights that also outline the matte gray piano. The stage has a lounge vibe, while the other rooms feel a little more rustic. The ac desperately tries to keep up with the lethargic humidity and oppressive heat that wafts through the open door to the festive backyard area.

I have seen Taylor perform in bands before but had never had the pleasure of hearing his own original works as a singer songwriter. Taylor hails from San Antonio, spent much of his adult life in Denton and Ft. Worth, and now resides in Dripping Springs with his wife and two sons. He owns the AudioStyles recording studio where bands not only receive high quality recordings, but they can also bunk, eat, and rehearse there. It’s a smart and well thought-out arrangement.

Taylor has his own band, Shadow of Jets, and has also performed with Maren Morris, Cut Throat Finches, The Westernauts, Luke Wade, and many others.  One thing that struck me when Taylor performed was the respect the audience showed him. Yes, the Scoot Inn is an intimate venue. But this is Austin, and normally people are chatting away in the background. Not here. The crowd ranged from young preppy twenty-somethings to tatted musicians, to yuppies, to old graying hippies.

His second song, “Phone in the Shower”, was relatable and authentic. Taylor wrote this song for his wife. He sings about the quirky things about her that he loves. He discusses unconventional things like how she takes her phone in the shower with her to listen to podcasts. There’s no sappy, idealized, unrealistic profession of love. His lyrics are real and raw. Refreshing, to say the least. He sang several other originals and ended with a George Strait cover.

Nathan Harlan was up next, and he just got up there and owned the space. Most people recognize this native Austin-ite as an iconic member of the band Endochine. Endochine was an incredibly popular rock band in the early 2000’s that toured the U.S. Nathan now fronts the Austin band, The Big Fix. He prefers to perform with his band, but it was a gift to hear him solo.

Nathan is a fantastic musician. He loves to listen to classical music, and being a classical musician myself, I thought he was trained classically. He isn’t, he’s self-taught. This blew my mind. The colors, textures, and dynamics with which he played were spectacular. He’d lead to an intense pivotal moment, then immediately drop down to subito, all with impeccable pacing and care. He didn’t rush through anything. You could feel and relate to all the emotions that he so beautifully conveyed.

As he passionately sang “…all that she wants is the dream, she still doesn’t know where she’s going…she fears the dream may be over…”, I sat there wondering if he had read the minds of many women! “I’ll get to know you, through all the joy and pain. You see we’re all the same, through all love and hate”. His poetic lyrics protest for human connection. In this day and age, where so many of us just want to sit in our homes and stare at a screen, what listening to Nathan implored the audience to do is to get out more and to connect and to share and to feel.

Both Taylor and Nathan’s music feed your soul. Whilst, arguably, their bands can be more exciting to watch, with all their members and activity on the stage, Taylor and Nathan’s solo acts remind you to listen, to feel, to be human, and to be self-reflective. If you have never heard either solo, you should add them to your Austin bucket list immediately.