Vampire Weekend (VW) closed out their three-day run at Austin’s ACL Live at the Moody Theater with a special taping set for the KLRU Austin City Limits broadcast series. The crowd included lucky lottery seat holders who received the most sought-after tickets of the summer.

As soon as they spotted floppy haired front-man Ezra Koenig, along with original members Chris Baio and Chris Tomson, they welcomed them back with a burst of appreciative hollers and applause (VW’s last ACL broadcast was in 2013). Missing was Rostam Batmanglij, who amicably left the group in 2016, but remains a contributor. Other personnel changes include the addition of four new band members (Greta Morgan, Brian Robert Jones, Will Canzoneri, and Garret Ray). 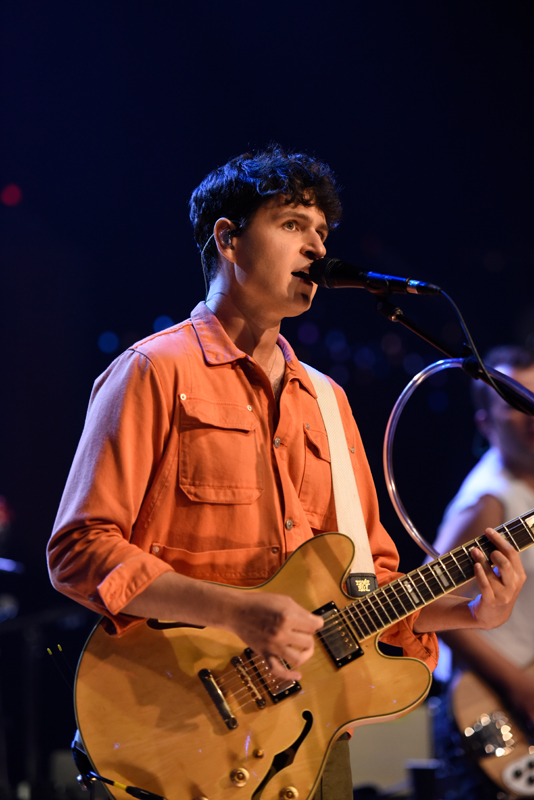 Koenig took the stage sporting a decidedly new look — his preppy attire of the past was replaced by a more laidback ensemble consisting of an orange safari shirt, drawstring hiking pants, and Chaco sandals. His choice of versatile and comfortable attire may have been an early clue of what to expect in the evening ahead. Fans were about to see a band that is more confident, unconcerned about image, and carefree enough to explore cunning new musical areas.

The evening opened with “Sympathy”, a biting, rhythmic-driven piece from the recently released album “Father of the Bride (FOTB)”. Classic crowd favorites “Unbelievers” and “Cape Cod Kwassa Kwassa” followed igniting the crowd which included many long-time fans. However, it was the next song of the evening, “Sunflower”, that sent a jolt through the theater and reminded the audience that VW is continuing to grow in unexpected and delicious directions.

Guitarist Brian Robert Jones showed his value by laying down some six-stringed funk while clad in a tie-dye tee and swim trunks (lovin’ it! See you at Barton Springs later?). The jam continued as Koenig joined in trading riffs with Jones in an energetic guitar collaboration.

Returning to past material, Koenig delighted the crowd with his yodel-like vocal runs in the song “White Sky” and then quickly returned to their newer FOTB material performing the light and snappy “Bambina”. These two bouncy lilts gave way to something unexpected. Perhaps the performance that most strongly highlighted VW’s innovation was their rendition of FOTB’s “2021” (a year many anticipate!).

The song began with an airy melody featuring Koenig’s use of a Peter Frampton-inspired Talk Box. Starting sparse and minimal, “2021” slowly built, added layers and eventually morphed into an all-out jam session that electrified the crowd. Next up, was the much-adored mid-tempo melody “Step” (we felt it “in our bones”!) which led into FOTB’s slow and lounge-vibey “My Mistake”.

VW’s versatility as a band was on full display mid-set with a rendition of “New Dorp. New York” (originally a SBTKRT / Koenig collaboration). Guitarist Jones’ axe skills were showcased again shredding on this psychedelic EDM tune that included Koenig rapping over a steady beat that drove the audience into a dancing frenzy (particularly the energetic ladies in the front row).

Back-to-back hits from FOTB followed including “This Life”, a song with dark lyrics contrasted by a deceptively happy melody that made heads bob, and “Harmony Hall” featuring the poignant lyric “I don’t wanna live like this, but I don’t wanna die.” These new songs were followed by a rapid-fire dose of proven hits consisting of the dynamic song “Diane Young” (the surf-music beats brought the crowd to their feet), the lively “Cousins” and a highly anticipated performance of the song that brought VW world-wide acclaim, “A-Punk”.

As with any good work-out, VW knew it was time to cool down before heading home. The enchanting “Hannah Hunt” washed over the crowd with the calmness of a satisfying child’s pose. An equally soothing melody followed as VW launched into their stripped-down song “Jerusalem, New York, Berlin”. The piece’s tranquil mood ceased with an unexpected cutting turbulence of drums that mushroomed into a dramatic crescendo that left Koenig standing solemnly guitarless in front of a spotlighted mic before exiting the stage.

Phew! What a ride! But the crowd wanted more and successfully begged for an encore. VW returned performing a cover of Crowded House’s “Hey Now” which was well-received by the audience who decided to collectively sing along.

The evening took an interesting turn when Koenig explained that the encore would include the re-performance of two songs (“2021” and “This Life”) for the broadcast editors (the songs seemed to be shorter versions). Fans didn’t mind and were happy for the added performance time. The band finished out the evening with the raucous “Walcott” and we all were transformed “out of Cape Cod tonight”.

The set list for the evening (see below) was a balanced mix of time-proven fan favorites and new material. The limited television format combined with VW’s growing catalog of songs, meant that choices had to be made to forego performing some beloved crowd favorites including “Oxford Comma”, “Ya Hey”, “Horchata”, “Giving up the Gun”, and “The Kids Don’t Stand a Chance”. (Hey, you can’t have everything).

In the end, the song selection was a beautifully curated sample platter of VW’s eclectic style from the past and the present that left the audience fully replete. The crowd departed the theater pleased that their much-adored indie band still delivers the classic VW sound, but also excited for the future as their band continues to grow, explore, and create adventurous new music. Tighten up your Chacos, it’s going to be a beautiful journey!

See our photo gallery from ACL night one.