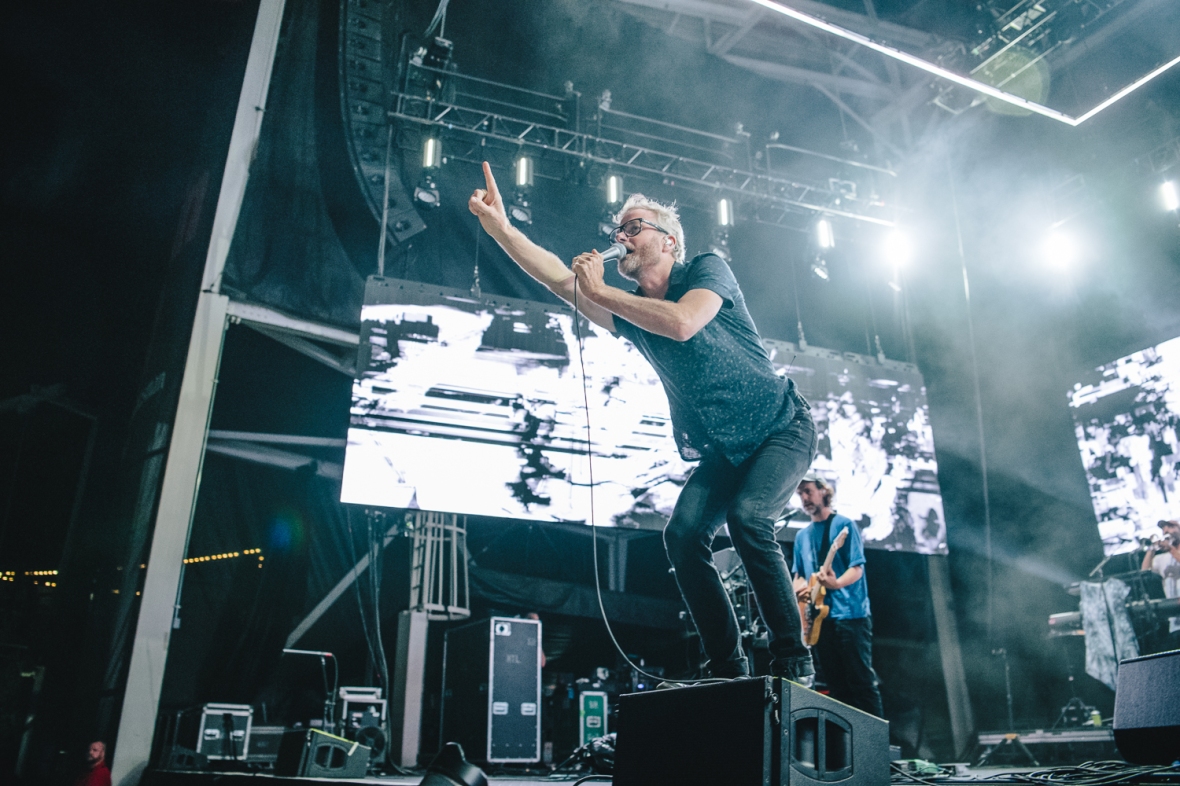 No fans of The National were phased by the 60+ minute rain delay. Everyone stuck around the outdoor Circuit of the Americas stage, made friends with strangers, and waited for the show to start with the patience only a passionate fan base could deliver.

The National strutted out with the nonchalant demeanor of a band who knew that audience would have stuck around to see them play through a Category 5 hurricane. Red solo cups in hand, the band descended from the wings and settled into what felt like a comfortable concert routine, kicking off with “Rylan.”

Frontman Matt Berninger controlled the show in its entirety. He calmly paced the edge of the stage like Mufasa, proudly taking in the crowd who waited out the storm for him. During the first song, he even broke up a shoving match in the audience by shouting at them from the stage. He commanded respect.

For most of the night, Berninger dragged confidently across the stage. Between bouts of roaming, his wiry frame clung onto the mic stand for dear life, maybe after one too many rounds of Solo Cup surprise (he also stumbled off a stage monitor once). Sonically, his low register projected a more gravelly timbre like he’d abused his vocal cords on tour between records. Berninger vibed like a tipsy Portlandia-ish (hipster) David Bowie who was totally at home with the crowd. 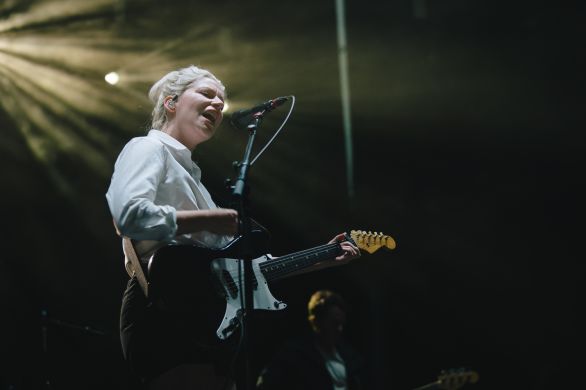 Berninger poked a bit of fun- he slurred introductions of the female singers who sang beside him between most songs. There was a brief back and forth with guitarists Aaron and Bryce Dessner comparing the band’s hometown of Cincinnati to Nova Scotia, origin of the opener/lite garage-pop band Alvvays. He also called his wife out at the cabana in the audience, recognizing her support of him, and inspiring songs like “Hey, Rosey,” which was performed emphatically. 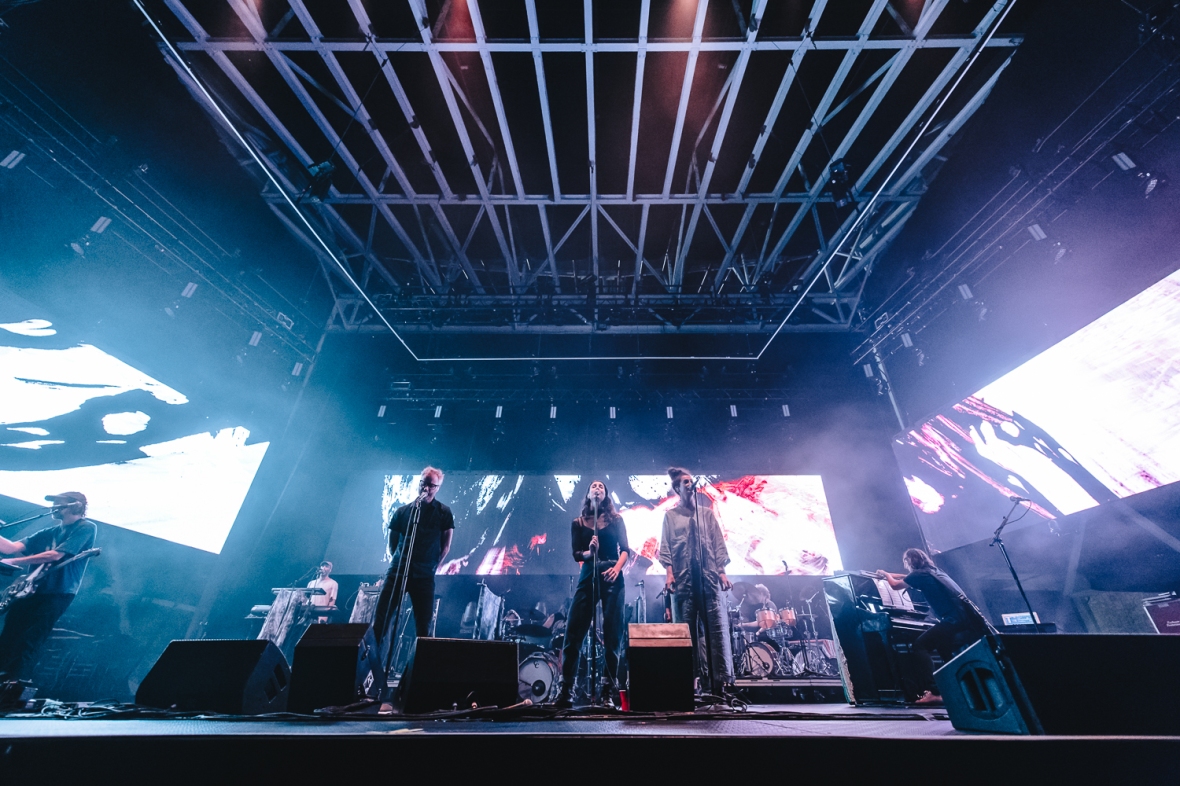 The band’s heavy energy and retina-burning A/V tricks rarely matched Berninger’s subdued body movement. His baritone growl juxtaposed the heavy guitar and drum patterns, which often teetered towards feeling like lighting a firework whose fuse fell flat. The frontman appeared to put in zero effort to have fun, yet seemed to care immensely about the experience of those around him. Towards the end of the set, an engaged Berninger waded out into the audience and literally had to be reeled in by the mic cord by a stagehand.

Berninger’s visual portrayal of “The System Only Dreams in Total Darkness” came off as slightly overly dramatic, with huge sweeping arm gestures, yet seemed appropriate for the song tone. The band was at their best when they were building anticipation in the longer tunes, the singers playing off of each other (with quite exceptional backing harmonies). Emotionality of songs like “Pink Rabbits” brought tears, hugging, exclamations, and singing along from literally everyone. THAT was the moment that clicked why so many people waited out the storm to see this show.

During the encore, Berninger discretely handed a bottle of wine and solo cups to fans in the front row. He also went on to thank everyone for showing up in the weather, and promised the socks back to a fan who had literally given the band their wet socks to be blow dried post-storm. The dude cares, and the people love him for it.

The band closed leading an arm-in-arm acoustic/a cappella sing-along of “Vanderlyle Crybaby Geeks.” The audience knew every word, and the community’s love showed why Berninger performs with such security. The National is really just a big family band- and the audience is an extension of that family.

Rylan
Quiet Light
The Pull of You
Hey Rosey
Don’t Swallow the Cap
Bloodbuzz Ohio
Oblivions
So Far So Fast
Where Is Her Head
Day I Die
The System Only Dreams in Total Darkness
Pink Rabbits
Light Years
You Had Your Soul With You
I Am Easy to Find
Graceless
Terrible Love
Encore:
Mr. November
Fake Empire
Vanderlyle Crybaby Geeks