“It’s pronounced SIM-ill. It means simple in Welsh,” Syml’s manager told us upon entry to the show at Antone’s on Saturday. Simple, it was.

Most concert experiences are a chaotic combination of subwoofers and flailing limbs. Syml’s performance was the exact opposite. The famed nightclub was pitch black with sound so cleanly mixed that Billy Mays would have endorsed it. The crowd took “attentively silent” to a new level.

The solo project of singer Brian Fennell, Syml’s 3-piece lineup consisted of just Fennell on keys/guitar, a drummer, and another keyboard/sample setup. The band looked balanced and at-ease- that is, when you could see them. The room was pitch dark, complete with noticeable absence of stage lights during the performance.

The effect was a complete focus on the music. You could feel the audience breathing it in. Concertgoers stood shoulder to shoulder, and could only assume their fellows were still next to them once the lights went out. The sound consisted of a great mix of electronic and acoustic elements, between acoustic guitar, auto-tuned vocals, and alternating triggered drum pads and live drums and cymbal crashes. Syml glided through the tunes without so much as a peep from the faceless audience at his feet. 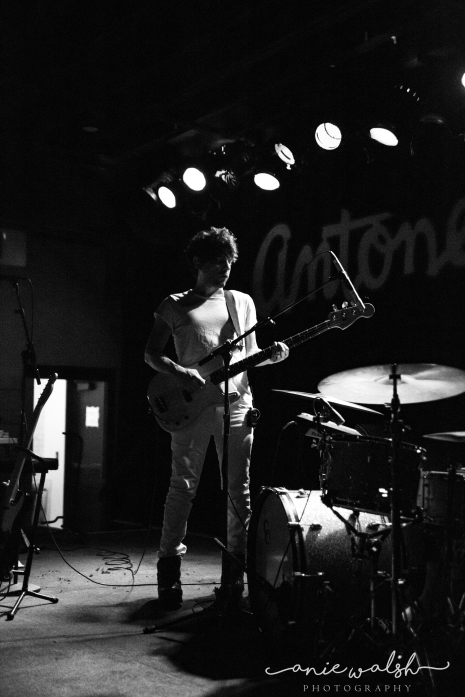 At the conclusion of each song, house lights poured over the crowd who came out of their coma to applaud Syml. Onstage, a spotlight finally lit up Fennell, where his personality shone just as bright. He took a live Q&A session, referred to his drink as “whiskey beer,” and led the house in a round of “Happy Birthday” for his daughter’s 3rd year around the sun.

Syml may have intentionally kept his visuals sparse, but the message was delivered succinctly. Fennell’s defense of his songs balancing depression and celebration of life tied the performance together, and gave new connection to his reverb-soaked vocal chain. Devoid of stage light, it was that much more impactful to feel the rhythm of electronic synths before the climactic push of live instrumentation.

Musicians don’t need an elaborate stage plot to keep an audience engaged. Sometimes you just need to keep it Syml.